On Monday night I attended the 25th birthday celebrations of SafeGround, which were held at Mercedes College.

It is 25 years since Sister Patricia Pak Poy launched a petition to he Federal Government drawing the attention to the House to the appalling plight of the Cambodian people maimed and killed by landmines.

The Australian Network of the International Campaign to Ban Landmines (ANBL) was formed.

In 1997 a ban was declared and this evening was a chance to celebrate the humanitarian outcome which was achieved.

The MC was Dr Adrian von der Borch who kept the evening running smoothly and on time!

Archbishop Philip Wilson spoke reflecting on t the work and involvement of the Catholic Commission for Justice and Peace.

Gorgon Stanger stepped in to speak for Helen Stanger who unfortunately couldn’t make it. He gave a concise history of the beginnings of the Australian Network and the Mine Ban Treaty, the Convention on Cluster Munitions and a look at the work of ANBL and its morphing into SafeGround.

We were then shown a film, How Long Will This Bomb Say?, made by John Rodsted and Mette Eliseussen  showing the work of mine removal in the Pacific Islands. Some incredible figures of the number of unexploded bombs in the islands, especially the Solomon Islands.

Loren Thomas, the National Co-ordinator of SafeGround, gave an impassioned speech about  current activities and future plans for SafeGround. Her figures were mind-blowing,, especially the number of bombs dropped on Cambodia and Laos. The figure is in the multi millions! Full B52 bombers dropping their loads every eight minutes for years and years. The scariest thing she described was the fact that the cluster bombs were bright coloured and often had ribbons attached and so were very attractive to children, who of course when picking them up were either killed for maimed.

I can remember in 1984 seeing dynamite fishing happening in the Phillipines.

Lastly Hugh Graham from Minelab spoke about how modern technology is helping to rid these places, safely, of the unexploded bombs. Minelab works closely with demining agencies including NGOs and various charitable organisations.

As I looked around at the audience I did despair a bit as it was mostly made up of people 60 years and over. I wonder what will be the future of SafeGround if there are no young ones moving up the ranks and taking an interest. I have one answer! If every member of SafeGround gave a gift of SafeGround membership to their family for Xmas or birthday, then maybe we may get some more young members.

It was a great celebration of a lot of hard work by committed humanitarians! 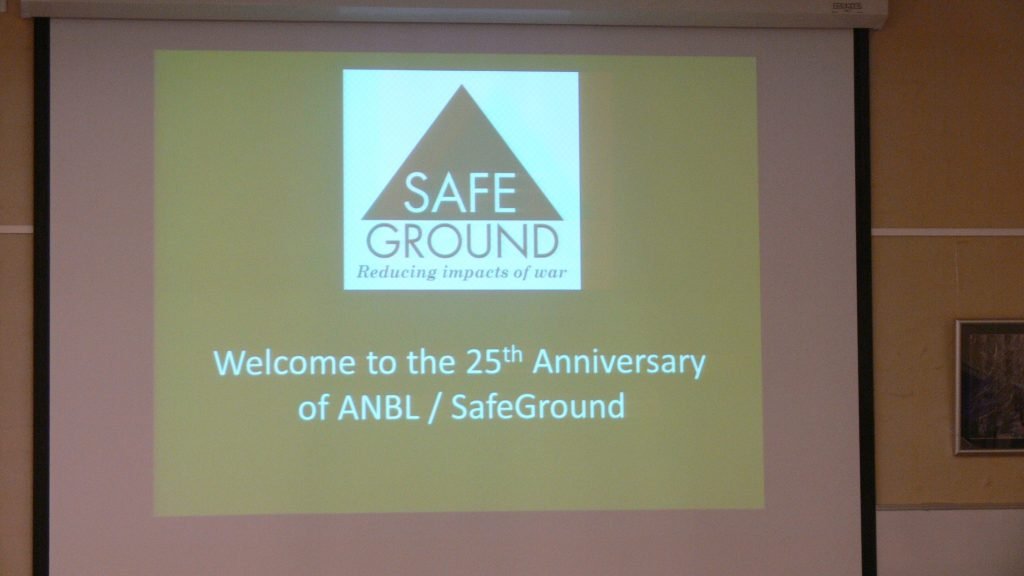