Have just received my copies of School Magazine Orbit, which has my story, She Saw Him Fall From the Sky, in it.

It is the story of Yuri Gagarin and his return to earth after he became the first man to orbit the earth in 1961.

Fifty years after he landed the Russians admitted that he hadn’t landed where he was expected to…instead he landed in a field and had to ask directions to Moscow and get some help to get back there. Ha! Ha! Really funny when you think about it. 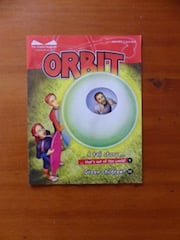