I recently discovered that living in Strathalbyn is a former Tea and Sugar Engine driver!

Andrew Soar contacted me after buying the book from local shop Argus House. Yesterday I met him and had a wonderful chat about his train driving days and the history of the train.

Andrew personally knew Alf Harris, who was the Father Christmas on the train for over 30 years. Alf is now buried in the Stirling North Cemetery and his headstone has a locomotive on it. I intend to have a look next time I am up Pt Augusta way!

Andrew kindly gave me a copy of his Certificate of Competency as  Locomotive Engineman Class 2, which he obtained on 18/12/1971.

I also have a copy of a list of the Commonwealth Railway Guards from January 1978. Andrew’s brother’s name is on the list as working for the railways was a family affair! Unfortunately many of the names have a line through them, indicating the men have died.

I was also shown a train timetable. See below: 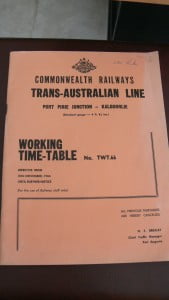 Andrew had some old photos of him in the driver’s cab and the long lonely stretch of line which reached across the outback.

As we wandered around his garden bits and pieces of railway memorabilia popped up.

Below is a selection of old signal lights, used by different workers at different times. 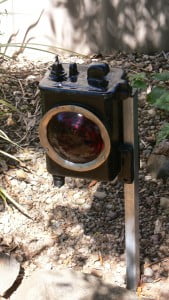 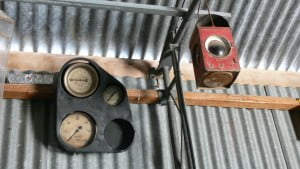 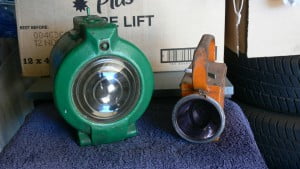 Did you know that every sleeper is numbered? I had no idea. These are some of the numbered nails. 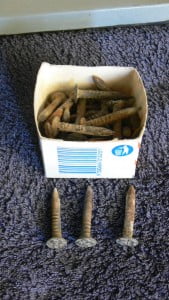 When a gang was working this sign would warn the train drivers. 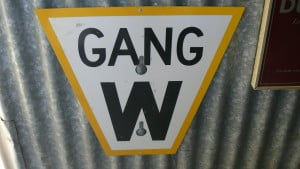 The little phone bowes which used to along the side of the railway line were always padlocked. With beautiful heart shaped locks! 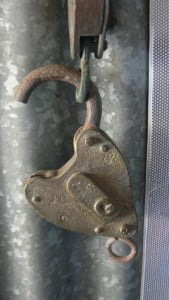 Andrew had a million stories to tell, of which I heard only a glimmer. It was a different time then, when practical jokes could be played on fellow workers without fear of losing your job!

Lots more stories to be collected about this bygone era!

2 thoughts on “Tea and Sugar Train Driver in my Own Back Yard!”